Crate Training 101: Teaching a Puppy to “Kennel Up”

Many articles online talk about how dogs are den animals, meaning that dogs should love their crate — which leads many puppy owners to be very confused when they put their puppy into a crate and go to leave, just to have their puppy make a fuss. Before long, the puppy begins to refuse to go into their crate at all.

Teaching dogs to love their crate is often fairly simple — the goal is to create a conditioned emotional response to their crate. That is, the goal is to teach them that good things come from and happen there.

4 Tips to Teach A Dog to Love Their Crate

For many dogs, these things are enough — they’ll quickly learn to run into their crate and be quite happy there. But for other dogs this isn’t enough. For example, in a recent puppy seminar, I had a pup who had developed a serious distrust of her crate after being shoved into it one too many times.

I also had a client with a foster dog who had been labeled “aggressive” because he had twice snarled and air snapped at people who had pushed him into a crate.

I used a simple game in both cases and within less than 15 minutes in both cases I had the dog happily walking in and out of their crates. Whether dogs take naturally to their crate or not, I like to play the following game to further build their positive association with their crate.

How to Teach “Kennel Up”

To start this game you need 4 things — a dog, some yummy (preferably stinky) dog cookies, a crate and either an exercise pen (xpen) or a leash. If using an Xpen, set it up around the entrance to the crate, so the puppy is confined to the area, but NOT forced to remain in the crate. If using a leash, I recommend standing on the very end close to the door of the crate.

Then toss a few cookies on the floor in front of the crate for puppy to eat. To start, they shouldn’t even be inside the crate, just nearby. Once the puppy has happily gobbled up the first few freebies, set one cookie right on the inside of the doorway of the crate. It should be close enough to outside that they don’t have to step inside to eat it, and can just reach their nose inside to gobble it up. Reward this with a few more cookies outside the crate.

Gradually alternate between cookies outside the crate and cookies in the doorway, every 2-3 turns moving the “crate” cookie slightly further inside. Be sure to make it easier with some cookies and then gradually harder with a few more, until the puppy has to place first one paw, then another, inside the crate.

If you find the puppy doesn’t want to go further than sticking out her neck, try placing a small handful of cookies in the doorway so that half the cookies are within reach and half are *just* outside of the puppy’s reach. This will convince most pups to place that first foot within the doorway.

Wait a little while and then play the game again.

Before long, the dog will be happily chasing cookies into the crate. At that point you can begin to add a cue, such as “Kennel up” or “Go to your house.” Combine this with the tips above, and most dogs will learn pretty quickly to enjoy going into their crate.

Join our email list to automatically receive a weekly email (every Wednesday!) when there are new posts here on the site.

You have Successfully Subscribed! 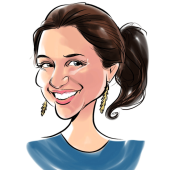 Melissa works part time as a dog trainer, teaching Life Skills classes and a number of specialty classes (walking, recalls, tricks, etc) at Superior Dog Training. She lives with her German Shepherd, Riley, who has her Treibball Champion Title and is now going back to the basics to learn not to jump on strangers.

No (visible) treat? No problem!

Are You Smarter Than Your Dog? (Probably Not.)

Just type your email in the box below to get the latest content!

You have Successfully Subscribed!